the vector in the new coordinate system. The two are related by 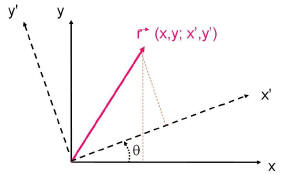 the equations of coordinate transformation we discussed in week 4 of the course.
These may be written in matrix form in a very convenient way (check):

is a rotation matrix by θ. Note the transformation preserves lengths
of vectors

as we mentioned before. This means the rotation matrix is
orthogonal:

These matrices have a special property ("group property"), which we can show
by doing a second rotation by θ':

Another notation you will often see comes from the early days of quantum mechan-
ics. Write the same equation

N.B. In this notation the scalar product of

, and the length
of a vector is given by

Suppose a matrix B rotates

. Now we rotate the coordinate
system by some angle as well, so that the vectors in the new system are

What is the matrix which relates

i.e. the transformed
matrix B in the new coordinate system?

so the matrix B in the new basis is

This is called a similarity transformation of the matrix B.

• matrices R which preserve lengths of real vectors are called orthogonal, RRT =
1 as we saw explicitly.

A similarity transformation with unitary matrices is called a unitary transfor-
mation.

• If a matrix is equal to its adjoint, it's called self-adjoint or Hermitian.

is symmetric, i.e. A = AT , also Hermitian because it is real.

is antisymmetric, and anti-self-adjoint, since

Just as you can define a function of a vector (like

), you can define a function
of a matrix M, e.g. F(M) = aM2 + bM5 where a and b are constants. The
interpretation here is easy, since powers of matrices can be understood as repeated
matrix multiplication. On the other hand, what is exp(M)? It must be understood
in terms of its Taylor expansion,

!. Note that this makes no
sense unless every matrix element sum converges.