Rational, or fractional exponents, indicate that we have a radical expression. They are
intimidating at first but we should quickly get used to working with them. Basically, the
denominator is the root and the numerator is the exponent.

The above instructions did not ask to simplify, just rewrite using rational exponents.

B. Convert to a radical then simplify.

When variables are involved, many texts will say that all of them are assumed to be
positive to avoid the principal nth root problem and absolute values. We can do the
following types of problems in a number of ways.

Often simplifying using the rules of exponents first is the easiest method but sometimes
converting to a radical first can simplify things, both methods yield the same result.

C. Simplify and express your answer in radical notation. (variables are positive)

Notice that in the above problems they all worked out nicely because the exponents were
multiples of the root. This is not always the case as illustrated below.

All the rules of exponents hold true when working with rational exponents. For example,
when multiplying we add exponents, but the exponents in this section are fractions.

D. Simplify and express your answer in radical notation. (variables are positive) 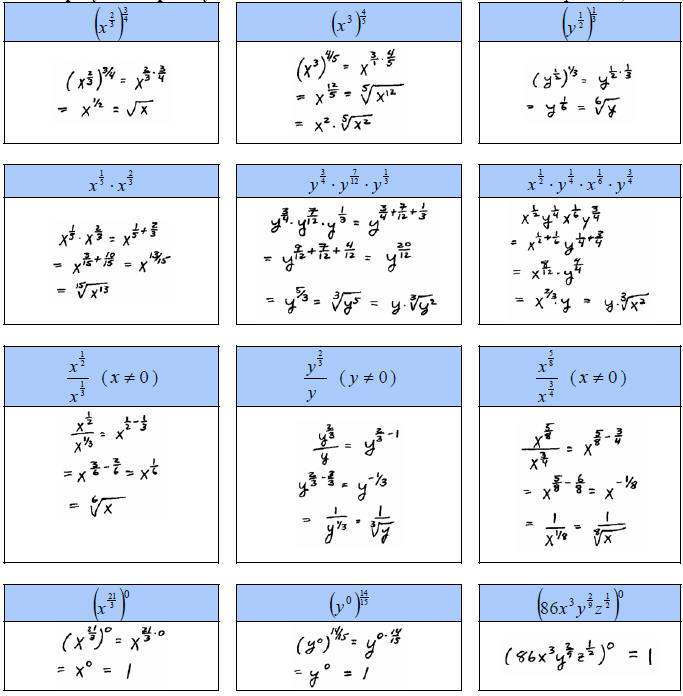 Sometimes we will be asked to multiply radicals with different roots but the arguments
will have the same base. This may seem impossible at first but it can be done as follows: